A drainage basin is a region of land where water from rain or snowmelt drains downhill into a body of water, such as a river, lake, dam, estuary, wetland, sea or ocean. The drainage basin includes both the streams and rivers that convey the water as well as the land surfaces from which water drains into those channels. The drainage basin acts like a funnel - collecting all the water within the area covered by the basin and channeling it into a waterway. Each drainage basin is separated topographically from adjacent basins by a ridge, hill or mountain, which is known as a water divide or a watershed. Especially in North American usage however, watershed refers to the drainage basin itself. Other terms that can be used to describe the same concept are catchment, catchment area, catchment basin, drainage area, river basin and water basin. There are two different patterns in which water can drain. The first one is called a dendritic drainage pattern. The second drainage pattern is called a trellis drainage pattern. 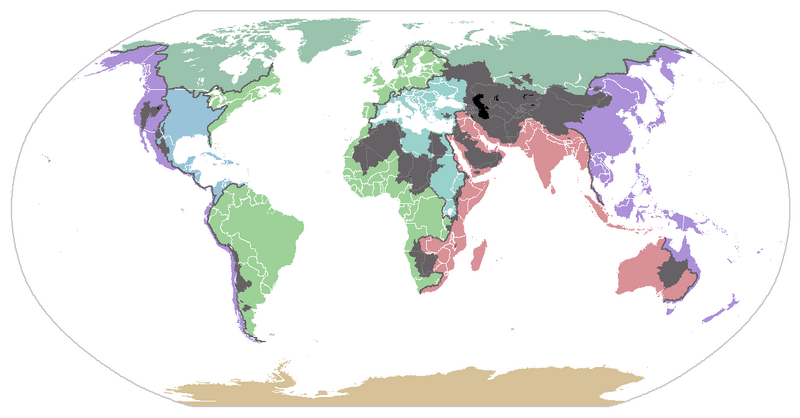 Drainage basins of the major oceans and seas of the world. Grey areas are endorheic basins that do not drain to the ocean.

Endorheic drainage basins are inland basins that do not drain into an ocean; around 18% of all land drains to endorheic lakes or seas. The largest of these consists of much of the interior of Asia, and drains into the Caspian Sea and the Aral Sea. Other basins include the Great Basin in the United States, much of the Sahara Desert, the watershed of the Okavango River (Kalahari Basin), highlands near the African Great Lakes, the interiors of Australia and the Arabian Peninsula, and parts in Mexico and the Andes.

Drainage basins have been important historically in determining boundaries, particularly in regions where trade by water has been important. For example, the English crown gave the Hudson's Bay Company a monopoly on the Indian Trade in the entire Hudson Bay watershed, an area called Rupert's Land. The company later acquired the North American watershed of the Arctic Ocean (the North-Western Territory). These lands later became part of Canada as the Northwest Territories, making up the vast majority of Canada's land area.

Today, bioregional democracy can include agreements of states in a particular drainage basin to defend it. These include the Great Lakes Commission.

The largest drainage basin in the world is the Amazon, covering 6,144,727 km² (a third of the area of South America).

In hydrology, the drainage basin is a logical unit of focus for studying the movement of water within the hydrological cycle, because the majority of water that discharges from the basin outlet originated as precipitation falling on the basin. A portion of the water that enters the groundwater system beneath the drainage basin may flow towards the outlet of another drainage basin because groundwater flow directions do not always match those of their overlying drainage network. Measurement of the discharge of water from a basin may be made by a stream gauge located at the basin's outlet.

Rain gauge data is used to measure total precipitation over a drainage basin, and there are different ways to interpret that data. If the gauges are many and evenly distributed over an area of uniform precipitation, using the arithmetic mean method will give good results. In the Thiessen polygon method, the watershed is divided into polygons with the rain gauge in the middle of each polygon assumed to be representative for the rainfall on the area of land included in its polygon. These polygons are made by drawing lines between gauges, then making perpendicular bisectors of those lines form the polygons. The isohyetal method involves contours of equal precipitation are drawn over the gauges on a map. Calculating the area between these curves and adding up the volume of water is time consuming.

Drainage basins are important elements to consider also in ecology. As water flows over the ground and along rivers it can pick up nutrients, sediment, and pollutants. Like the water, they get transported towards the outlet of the basin, and can affect the ecological processes along the way as well as in the receiving water body.

Modern usage of artificial fertilizers, containing nitrogen, phosphorous, and potassium, has affected the mouths of watersheds. The minerals will be carried by the watershed to the mouth and accumulate there, disturbing the natural mineral balance.

Because drainage basins are coherent entities in a hydrological sense, it has become common to manage water resources on the basis of individual basins. In Minnesota, U.S.A., governmental entities that perform this function are called watershed districts. In New Zealand, they are called catchment boards. Comparable community groups based in Ontario, Canada, are called conservation authorities. In North America this function is referred to as watershed management. In Brazil, the National Policy of Water Resources, regulated by Act n° 9.433 of 1997, establishes the drainage basin as territorial division of Brazilian water management.

Community content is available under CC-BY-SA unless otherwise noted.
Advertisement